skip to main | skip to sidebar

From the mouth of babes...

My Attempt at Satire

“In Our Backyard!” yelled picketers as they held signs in front of the Utah State Capital today.  Thousands of residents from the Wasatch Front’s eastern communities gathered, protesting the PRC’s failure to produce a proposed prison location east of I-15.
Holladay resident, Mary Regard, says, “We are angry, no, offended that the PRC wouldn’t consider any of our beautiful communities to house the new prison.”

“Just the fact that even the current prison, which is in Draper, is on the west side of I-15, I mean, that is a real slap in the face for us.  What’s wrong with putting it on the east side?” said Bill Styme, Sandy City Resident.
“I think what we have here is just oversight by the PRC.  I don’t think it was intentional, nor do I think they meant to infer that we have nothing to give to the Department of Corrections.  Nevertheless, the residents have spoken, and they are outraged,” says Cottonwood Heights Council Member Glenn Brightheart.

“It would be such a tremendous boost to our economy and add the diversity that our communities crave.” added the chairman of the Draper Urbanization/Metropolitanization Business Association (Due to FCC regulations, we are not allowed to publish their acronym).

While the PRC has proposed locations in or near the cities of Eagle Mountain, Saratoga Springs, Tooele, West Jordan, and two on Salt Lake City’s western boundaries, there have been no proposed sites along the Wasatch Range.
Salt Lake City resident, Joe Lester, suggested a site next to the University of Utah.  “We have the University Hospital right there.   Someone gets stabbed with a shiv?  No problem.  Roll them down the street on a wheelchair and they are at the hospital.  We lower transportation cost for the taxpayer, and the prisoners get access to the best medical care in the state within a matter of minutes.  That right there is a win-win.  And our mayor would agree!”

Lester was referring to the recent tweet from the Salt Lake City Mayor’s office, “The PRC would be ‘wholly inappropriate’ to put the prison out by Kennecott and airport.  Better options right here on the eastern bench! #westisnotbest #IMBY #eastsideprison.”

Even the younger residents near Emigration Canyon are hoping for the prison to move near their neighborhoods.  Teachers assigned students to write persuasive arguments as to why the prison should be moved closer to their homes.  “The prison lights look like candles on a birthday cake!” wrote third grader Easton Boon of Bonneville Elementary.  “I wish I could look at that outside my window before I fall asleep at night.”

Cities and townships throughout the Wasatch Range are working with their city councils to make it easier for the prison to be moved within their city boundaries.  The town of Alta is changing their city code to allow for every prisoner to have a dog.  “We would hate for them to be moved up here and not be allowed this inalienable right,” states a letter from the Alta Town Mayor’s Office.

The small town of Granite is also throwing their hat in the ring, with talks of revamping and adding a few more rooms to the deserted polygamist compound at the mouth of Little Cottonwood Canyon.

Even Park City is trying to get their foot in the prison door.  “Vail is in discussions with the city about potentially moving the prisoners directly into Park City Mountain Resort,” said a member of the planning commission who spoke with anonymity, as he was not allowed to discuss the closed-door proceedings.

Some residents are even speculating that the PRC is stalling to make a decision because members of the PRC are trying to purchase enough land in the unincorporated areas of Salt Lake County to sell to the state, making a sizable profit for themselves, and bolstering their potential to run for future offices within that community.  “It’s all about giving the people what they want,” said one member of the PRC with a wink, as he patted his wallet.

Long time Draper resident, Phil Noogle says, “If anything, just leave it in Draper.  If we didn’t have the prison, we would never have had the large swaths of empty and cheap land available for businesses like Ikea, Furniture Row, and the new RC Willey Store, and that boat place, and the McDonalds in the middle of nowhere.  They promised us 60 years ago that the state penitentiary would bring a huge economic boom to our area, and with that part of Draper being one of the last developed areas on the east bench, they were finally right!”
Posted by Token Asian Friend at 12:22 PM 2 comments:

Things you will only hear at my house.

Kid: Mom, what are we having for dinner?

Kid: Oh! That's why the chopsticks are on the table!


Neighbor Kid: [Token Asian Friend], you don't look like yourself since you got your hair cut.

Kid: Mom, what are you eating?

Me: Fuzzy Meat, Fried Gluten, and Spicy Bamboo with rice.

Kid: Mmmmmmmm! I want some! I want my own bowl of it!

"It's picture day tomorrow," I told my preschool age son. "What would you like to wear for your pictures?"

"Hmmmm," he thought. "Shirt and underwear and pants."

I was pretty excited he had committed himself to this, because normally he leaves the house wearing only two of these three items.
Posted by Token Asian Friend at 2:33 PM 2 comments:

He sees you when you're sleeping...

"Why are you scared?"

He nervously looked around, and silently cried, "Santa Claus is coming."

I couldn't help myself. "Santa Claus is coming? To town?"

That was pretty much when his screams and cries became inconsolable.

I think Santa Claus might need to leave the presents outside this year.

Even if I had a billion dollars.... 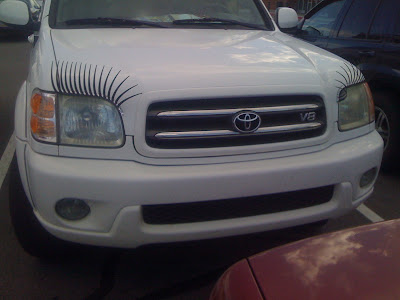 (Look again.  You may have missed the jewel details behind the lashes!)
Posted by Token Asian Friend at 3:10 PM 6 comments: